New research has proved to be a ‘game changer’ when it comes to diagnosing prostate cancer, says a leading North Wales Urologist who contributed to the study that took place in Wrexham.

The Alan de Bolla Wrexham Urology Unit at Wrexham Maelor Hospital was one of 11 units from across England and Wales which took part in the Prostate MRI imaging study (PROMIS) trial to discover improved ways of diagnosing prostate cancer.

Currently, a Trans-rectal Ultrasound (TRUS) biopsy, which identified high prostate specific antigen (PSA) levels in the blood, to diagnose the cancer. However, because of its random sampling, it may lead to inaccurate results, and can result in serious side-effects such as pain, bleeding, infections and problems urinating.

The PROMIS clinical trial discovered that carrying out a MP-MRI (Multi-Parametric MRI) scan first can help a significant number of men to avoid having a biopsy altogether.

The results from the study showed 27 per cent of men who had a negative MP-MRI did not need a biopsy at all. Crucially, 93 per cent of aggressive cancers were detected by using the MP-MRI scan to guide the biopsy, compared with just 48 per cent where only a TRUS biopsy was carried out.

Mr Iqbal Shergill, a Consultant Urologist based at Wrexham Maelor Hospital, said: “It is quite clear that the results of the PROMIS study are a potential game changer for men with prostate problems.

“The results showed that one in four men who had a negative MP-MRI scan result could have potentially avoided having a biopsy.

“The problem with a biopsy is that it can be associated with complications and also false results, so using a non-invasive method like a MP-MRI scan could potentially change how we practice in the future.”

Mr Shergill, on behalf of the whole research team, said: “My research team was delighted to be part of this ground breaking study and I know that all of the North Wales patients also felt the same way and felt honoured to be taking part in something that could change so many people’s lives, for the future.

“I would like to thank all the patients who took part. They have helped us answer an important question about how to diagnose prostate cancer.”

The National Institute for Health and Care Excellence (NICE) and Prostate Cancer UK are now looking at the results of the study and will decide whether to recommend changes in the way patients are treated based on the findings of the study across the UK.

Biker Phil is back on the road after ground-breaking treatment 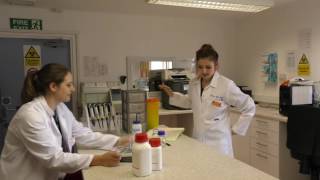